E.ON provides 100% renewable electricity for all 3.3 million customer – CEW Group
Cart 0
FOUND IT CHEAPER? Let us know and we'll do our best to match it! GET IN TOUCH

E.ON today announced it is now providing all of its residential customers across Britain with a 100% renewable electricity supply – on all tariffs as standard, and at no extra cost.

The change means more than 3.3 million homes now have an electricity supply matched by renewable sources including wind, biomass and solar. E.ON’s announcement is the largest of its type to date in the UK, significantly increasing the number of households in the country backed by 100% renewable electricity.

This comes as a survey of electricity customers shows more than three in five Britons (61%) not already on a renewable tariff, would be likely to change to a renewable electricity supplier if at a reasonable price.1

And with more than three quarters of people in Britain concerned about climate change (77%), and a similar number saying they could do more to be more sustainable (79%), the move demonstrates the need for companies to support consumers in taking steps to reduce their environmental impact.2

“Climate change is the defining issue of our era, and one that energy customers are increasingly concerned about,” said E.ON UK Chief Executive Michael Lewis. “We believe large-scale action can make significant change possible and we’re committed to playing a leading role and setting an example for others to follow, that’s why we’re providing all of our residential customers with 100% renewable electricity as standard – a change at a scale never seen before in Britain.

“Our announcement is an important first step in a journey towards a more sustainable and personalised energy system, but the future of energy doesn’t stop here. The opportunities include helping all of our customers to better manage their energy through smart, personalised and sustainable technologies.” 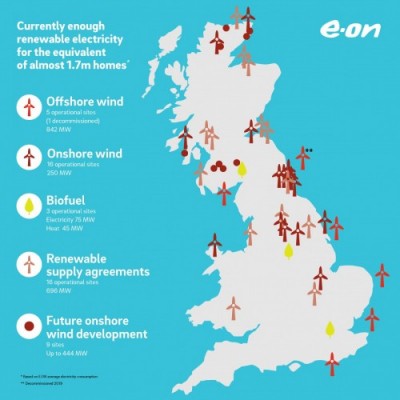 E.ON built its first wind farm on Anglesey in 1992 and was a partner in the UK’s first offshore wind farm – Blyth in Northumberland – in 2000.

Today the company owns more than 20 onshore and offshore wind farms in the UK, as well as biomass plants in Scotland and South Yorkshire.

E.ON is also the energy partner for the net zero carbon Elephant Park redevelopment in central London – using naturally sourced biomethane in a high efficiency district heating scheme – and has supply agreements with a number of independent renewable generators across the UK.